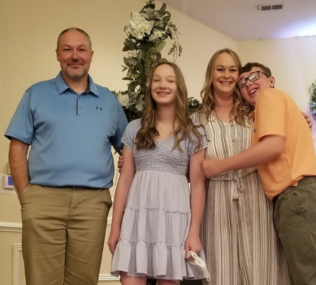 Jason was born in Marietta, Ohio, where he grew up and attended school.. He graduated from Marietta College with a B.A. in Spanish and International Business. In his early years, he attended Marietta Bible Center with his family where his relationship with the Lord began. After moving to North Carolina shortly after college, he became a full time teacher of Spanish with the public schools. He also attended the University of North Carolina at Charlotte, where he completed a M.A. degree in Spanish language, literature and culture. Jason transitioned from his teaching career to full time ministry here at Grace in the summer of 2017.


Jason and Michelle met and were married in 2006. Michelle grew up in the East Rowan area. That same year they also began attending Grace Bible Church. They have two children, Lizzie and Riley.

Michelle, who was once a high school science teacher, home schools the two children and acts as church secretary. Jason is a full-time elder, whose primary areas of oversight are teaching and youth ministry.